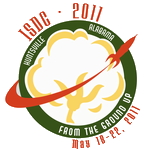 The 2011 International Space Development Conference logo represents the heritage and culture of Huntsville, Alabama that has made it what it is today. In the logo this agricultural heritage is represented as the cotton boll. The cotton grows "from the ground up." Alabama has been known for its cotton production and still is a large producer of the crop.

Huntsville has become recognized as The Rocket City because of the success of the Saturn V and the space program. The orange rocket with the trailing smoke stream is a symbol of Huntsville's space history. The many rockets that have been tested in Huntsville and then launched are yet another symbol "from the ground up".

The green ring containing the text is a symbol of our planet Earth. The burnt orange a symbol of the rust-colored clay dirt that is abundant in Alabama that helps to grow cotton. These images and colors combined create the logo for the 2011 ISDC.

If you see a blank box above, then please allow a few moments while the Tweets to load. You may have to reload the page too. The Twitter widget may be slow sometime, and it is due to the Twitter side server.