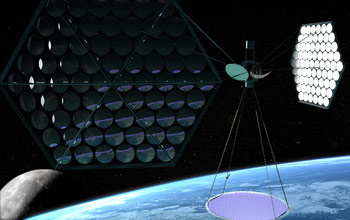 The United States and the world need to find new sources of clean energy. Space Solar Power gathers energy from sunlight in space and transmits it wirelessly to Earth. Space solar power can solve our energy and greenhouse gas emissions problems. Not just help, not just take a step in the right direction, but solve. Space solar power can provide large quantities of energy to each and every person on Earth with very little environmental impact.

The solar energy available in space is literally billions of times greater than we use today. The lifetime of the sun is an estimated 4-5 billion years, making space solar power a truly long-term energy solution. As Earth receives only one part in 2.3 billion of the Sun's output, space solar power is by far the largest potential energy source available, dwarfing all others combined. Solar energy is routinely used on nearly all spacecraft today. This technology on a larger scale, combined with already demonstrated wireless power transmission, can supply nearly all the electrical needs of our planet.

Another need is to move away from fossil fuels for our transportation system. While electricity powers few vehicles today, hybrids will soon evolve into plug-in hybrids which can use electric energy from the grid. As batteries, super-capacitors, and fuel cells improve, the gasoline engine will gradually play a smaller and smaller role in transportation - but only if we can generate the enormous quantities of electrical energy we need. It doesn't help to remove fossil fuels from vehicles if you just turn around and use fossil fuels again to generate the electricity to power those vehicles.

Chaired by John Mankins of Artemis Innovation and participations by some of the prominent space solar power researchers, the ISDC Space Solar Power Symposium promises to be a highlight of the conference.

If you see a blank box above, then please allow a few moments while the Tweets to load. You may have to reload the page too. The Twitter widget may be slow sometime, and it is due to the Twitter side server.